Sometimes one could ask if an Ultra High End System is really made for the music lover – or if it is something like a Bugatti Veyron, a car with can deliver over 1000 PS (hp), wich needs an air break to reduce its speed within an acceptable distance and it is not able to be used in a fashion it was originally designed for – because the people who have such a thing normally do not own their own race track.

If you want to drive from A to B you will get into big trouble with such a “Super Car” – you cannot park the damn thing because you have an extremely compromised round visibility, the clutch is like a digital converter – on or off – and nothing in between – and if you have the typical stop and go situation, very common with todays traffic, it will over heat.

It is the epitome of idiocy! – But all your “friends” will be jealous because they think, that you could only take up the “super sexy” blonde sitting on the passenger seat with their impressive silicone artwork under her shirt, her sprayed lips as well as the nice Botox expression  on her face with such a monster car.

But be aware – great lovers do not need big cars…..

I listened to nearly every Ultra High End (read Bugatti Veyron) installation at this Munich High End show, and to tell you the truth, it was mostly disgusting, you had to leave the room just after a minute of listening, because the played music was extremely disfigured, the whole demonstration was not longer sustainable.

It is strange, that you have to spent several € 100 000,- to be rewarded with something, which can be so bad and ugly, that you will maybe shock your neighbour or some of you best HiFi friends with just the size and weight of such systems – but you can never  show them how your super expensive purchase will sound, which is in my book the purpose of such an Ultra High End Audio System….If you do so, playing some well known tunes with those monsterous Installations, you have a good chance to be capacitated by your family, friends and maybe by yourself….

I know, that a HiFi show is never a good place to judge the sound of a component or a loudspeaker, but I can differentiate what will be a problem caused by the given room acoustic and what a completely imbalanced sound reproduction in the whole midband will sound like. I do not judge the ability to show recorded space, nor the resolution a system is capable of – and of course below 80hz there is in most cases a more or less disastrous boomy reproduction common practice. But what I judge is the frequency spectrum from 150 – 5Khz – which is not so much affected by the room acoustics – it should be a very easy task to get a balanced midband reproduction in a price range of € 100 000,- but it is far from that!

It is interesting, that the real highlights of this years Munich High End show was none of the bespoke Ultra HiFi installations, you had to dig much deeper, and the findings were mostly very small companies, or not even that – sometimes it is just ONE developer with ONE product. The scene changed in the last decade dramatically, today real development (I mean development and not bigger, heavier, more expensive) occurs not necessarily in connection with big companies, or big money, more and more a different view at the topic is originated by “underground” developers.

Sometimes I thought that I was part of a TV – show like “The Hidden Camera” and in the next second someone would tell me, “hey this was just a prank” but the bitter truth is, there was no “Prank Patrol” (kids TV show), it was damn serious.

Maybe some rare examples of “Think Different” presented by independent, little manufacturers could give us back some faith in an industry which completely missed the warning shot.

Some of my personal highlights:

One of the best Step Up Transformer of the whole show was this thing here…. from Michael Ulbrich. The name “Monster Can” is chosen a little bit bold, but if you hear the performance, you will forget about the funny naming…. 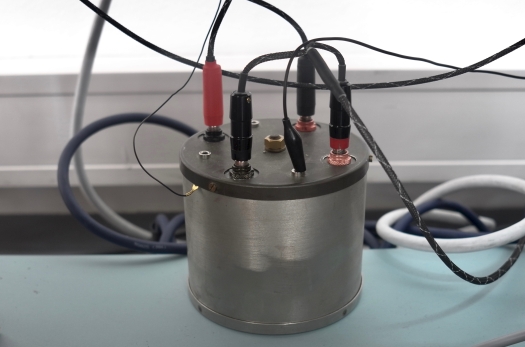 One of the most impressive turntables was  the L´Art du Son Transcription Reference from Martina Schöner. This machine showed most of the other installations, which often looked like the space ship of the “Borg” from Star Trek (Brakemeier Apolyt), how awesome pitch accuracy, weight and speed as also agility and neutrality will sound like! A dream! And yes, it is very expensive, but it was in my book the only very expensive deck, which had something like a realistic price performance ratio.

One gets confused, when a broadband loudspeaker chassis from the 30ties last century was one of the highlights of the whole show – in this case the legendary (rightly so) WE 755. Truly amazing!!!

Another great example of a very good turntable setup was the Thomas Schick 12″ tonearm combined with a Garrard 301 and a Vinylista plinth.

Something most people are not aware of – the Schick 12″ with the Grafite headshell can handle a very wide range of cartridges – and not just an Ortofon SPU or DL 103 – in this case, the arm is fitted with a Van den Hul Colibri. A cartridge which is not an easy task for a tonearm, often this little “bird” can sound very forward in the treble section. With the Schick 12″ arm the sound was very balanced!

Frank Schröder showed his latest tonearm creation the “Broadcast Arm”. It is a stabilized uni pivot design with a variable effective mass (13 – 23g). Frank mated the “BA” arm with a Miyajima cartridge, and the sound was sublime. An outstanding combination! 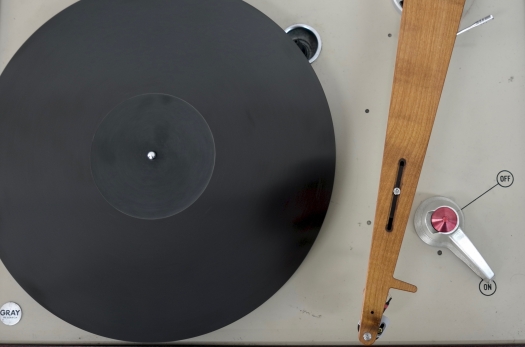 The turntable Frank used, was a fully restored and modified Gray Research HF 500. The sound was very detailed and natural with a bold colourful midrange and a fantastic drawing up of speed accuracy and an agile renedering of the leading edge as also a superb sense of three dimensionality.

In combination with the BC arm one of the very rare decks which could deliver a sound reproduction, which was amazingly real!

The chance to listen to an original Western Electric London Horn was assuredly one of the highlights in Munich. The whole system had a slight colouration in the range of around 580 – 800hz, it was a touch too forward in this frequency spectrum, but if you once got used to it, you were in for a real treat in the dynamic compartment. Maria Callas with one of their amazing arias from Giuseppe Verdi was so intense, so real and so emotionally touching, something at this sensual level you would hardly find with any other installation at this audio fair! 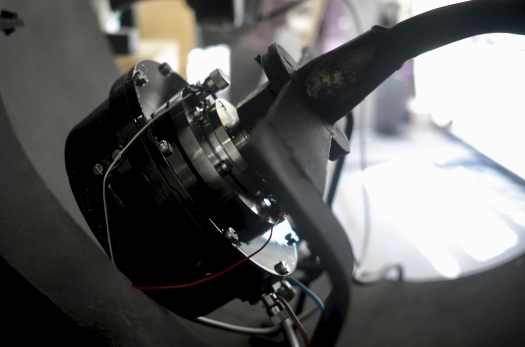 It was completely amazing, to realise that in the 30ties last century the audio industry was able to create a kind of sound, which  reproduceed music in such a realistic and touching way.

Sometimes I think it can´t be tue, that with all the computer power, the modern techniques and all the “high tech” we have available today , everything we can do is delivering some real torture, we could find in most of the so called “Ultra High End” rooms.

A side aspect of such an audio fair is also the product design we have to face today – form follows function is not modern anymore – today the designers have no more ideas, and therefor we have a lot of products, which could be probs of “Star Wars” or”Alien”.  Sometimes it is embrassing and sometimes you have to lough, it is probably the same situation which we can see within the car industries design departments – I mean – do you think a Toyota Prius is really beautiful and an example of outstanding design??

This I would call a classic design…..

Silbatone amplifiers are maybe one of the best money can buy. They are manufactured with special in house wound silver foil transformers and are designed with very special and distinguished circuit principles. They use throughout the finest NOS tubes of the audio history as also very good components from suppliers like Silvercore or Dave Slagle (Intact Audio) to name just a view.

The amazing WE London Horn System…..